This is initially an excellent magic store head Quarter at Iper (Belgium)  where products are offered are quality magic for professionals. 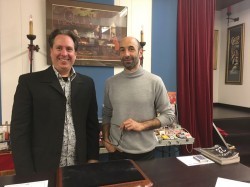 “Mephisto/Select Magic” is managed by Jos Denis, an very good manager who is often present at many congress in Europe and Foreign countries.  Today “Select Magic” is renowned worldwide for the quality of its stage products and its great creativity.

We are very respectful and very close to Jos Denis. We have a deep respect for a longstanding admiration.

We have a long-standing collaboration with Jos Denis from Select Magic. We are a licensed distributor of all the Grand Illusions that he has produced in recent years (PLG: Portable Gimmick Levitation, Ghost Levitation, Modern Art Illusion, Shadow Box, Doves vanishing cage and more recently Bar Table Levitation). We provide training and after-sales service.

This is initially an excellent magic shop online where products are offered are quality magic for amateurs and professionals.
“Marchand de Trucs” Head Quarters are in the beautiful area of Lorient in Brittany (France).
“Marchand de Trucs” is managed by Ludovic Mignon (Ludo), an excellent editor of French books, DVDs and magic tricks ans some of them also in English.
Today “Marchand de Trucs” is known worldwide for the quality of its products and its constant search for new effects.
We are very committed to anything like Ludo offers products and this for many reasons.
We have a deep respect for him and a real admiration long ago and he knows why. 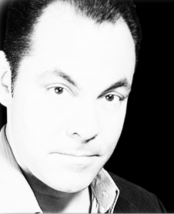 Today, Steve Fearson is recognized worldwide by his peers as one of the most creative minds in magic. Several of his marketed inventions have become quite popular, including Fearson’s Floating Cigarette which is considered by many to be a modern day classic. You may have seen David Blaine float a leaf on television using Steve’s method.

Steve is also the creator of Fearson’s Fantastic Floatation which was the first close-up self levitation on the magic market and spawned a ton of imitators. It is still a popular item among professionals, having been used on television by numerous performers like the Amazing Johnathan.

Entering magic in the early 90’s at the age of 21 Steve Fearson won nearly a dozen first place magic awards during his short performing career. He is one of the only magicians to ever win both the IBM and the SAM competitions, receiving first place in both. 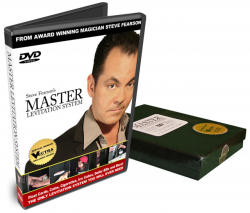 In the mid 90’s Steve was the star of the very first television special devoted solely to a close up performer. His one hour long special titled “Mr. Creator” was filmed and televised by the NHK network, the largest television network in Japan. This led to many more performances and television appearances. Within a few years though, Steve decided to retire from the performing scene.

The creation Steve is best known for recently is The Laser, as performed by David Copperfield in his live tour and on his most recent special. In this illusion, David’s body is cut in two in full view with no cover whatsoever!

That’s why we think Steve Fearson can have his place on our web shop. It’s an honnor for us to work with him and import his inventions and products in magic. We like him and his discoveries and creative magic very much.

At JB Magic they feel that their reputation is second to none in their industry. They had the UK’S number one magic shop for over 21 years. They have also an unparalleled knowledge of our profession. 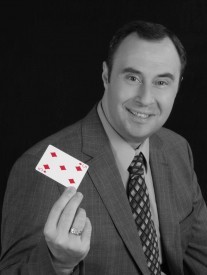 It is easy to just buy everything and tell all magicians that they are all good. But that’s simply not true. They hand pick their items and pass on to magicians only the ones they think are good.

Behind JB Magic you will find Mark Mason and his wife Tricia. Mark Mason have 20 years of performing under his belt. Not only does Mark perform for the some of the worlds leading corporate companies, he lectures for magicians and is worldwide accepted as one of the greatest magic demonstrators ever. You probably saw this fantastic “pitchman” performing a magic trick for sure during a magic convention somewhere in the world.

Mark Mason is the creator and supplier of professional standard magic tricks. At JB Magic they have a leading selection of Card Tricks, CoinTricks, Mentalism effects, Close Up Magic, magic DVD’s and much more.
JB Magic’s effects are used by some of the worlds leading magicians.

We are proud to offer you some great effects imported directly (U.S.A) from this renowned magic brand. 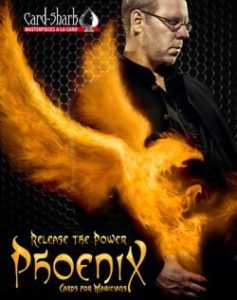 In the last few years Card-Shark created several high class vintage style decks and effects that influence the story telling and bizarre magic already. But this was only the beginning.

Once we rode Bicycles – Now we can soar with the Phoenix!

The new era in card magic started in November 2009 by releasing a unique new designed deck of Poker cards, specially made for magicians. After about 6 months Card-Shark started the whole range of Phoenix Double Deckers, the thinnest cards on planet earth. Exactly on its first anniversary after giving birth to the Phoenix, Card-Shark are continuing the revolution in card magic – by releasing the Phoenix Parlour Deck. The World’s Smallest Jumbo Deck is available in all kind of types including trick decks, custom prints, packet tricks etc. 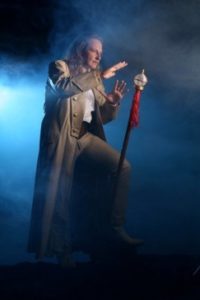 In the world of magic there is only one name that is synonymous with the art of levitation – Losander.
World renowned across three continents, Losander has performed  his magic in exclusive venues from Europe to Japan and Australia. He has performed in the internationally famed Magic Castle in Hollywood and is currently performing in the World’s Greatest Magic Show in Las Vegas. In 2006, Losander received the Milbourne Christopher Award for Illusionist of the Year and notable contributions to the art of magic.

Losander’s magic can be performed under any condition, from an intimate close-up environment to a large scale theatre stage.  Losander’s illusions and floating tables always draw a crowd, amazing even the largest of skeptics. Include Losander in your next event and your guests will experience a magical enchantment like never before.

World renowned across three continents, Losander has performed his  magic in exclusive venues from some of the finest Variety  Theaters in Europe.

Among many of Losander’s talents is his ability to custom create shows specifically for Trade show and Gala venues, being able to perform as a Master of Ceremonies to close-up magic, walk-around or stage show or  a Full Evening Show. Whatever you need, Losander can do! But what’s more is Losander will bring a totally new and original experience filled with magical enchantment to his audience .

Magicorum is proud to work with Losander in importing his products also because bad Asian copies of his Losander Floating Table ™exist on the market. These copies of Losander Floating tables™ are poorly manufactured and mass produced with inferior materials and workmanship and can barely be performed properly! So, in the spirit of the community of magicians, we must support, direct, protect and uphold the integrity of the magic and inventors worldwide. Conclusion, always buy the original and refuse copies! It is a question of ethics and respect towards your art and authors. 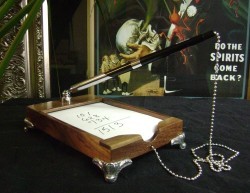 Dave Powell Magic designs and manufactures magic tricks using the finest materials and latest techniques. For over 20 years they have been serving the professional magician as well as collectors and magic hobbyist.

Viking enjoys an international reputation as a provider of not only beautiful, but also functional Magic equipment! Each and every piece goes through a thorough field test, using accomplished performers to test and evaluate the effect for ease of performance, audience appeal and durability. Once an effect makes it through this testing, it is put into production, passing five inspection stations as it is produced, plus two final inspections, before the item is sold. 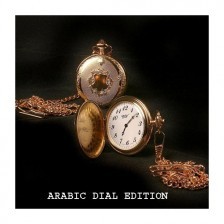 A monumental event took place in May of 2000. Viking Mfg. Co. acquired the entire assets of “Collector’s Workshop“, moving the production facilities to Edinburg, Texas. Collectors’ Workshop has set milestones in production, quality and design. They have brought the Magic fraternity an incredible array of magical illusions from close-up to stage. Now George and Carol Robinson take the reins of this legendary company, adding it to their own history making stable of companies. The combined force of these two powerful companies is a rare event in magical history and should prove exciting for those loyal to these two entities. 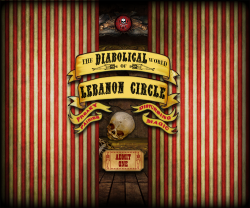 Lebanon Circle Magic is a one man business based in Kent, UK: Dan Baines. He is a creator of wounderfull range of hand mande magic props in bizarre magic. With his knowledge and good experience like creator of strange machines, haunted objects and many other fantastic illusion with dark stories. He produce also many other grotesque objets d’art of nightmares could not even conjure. He’s got a large and prestigious list of clients which reflects the quality and exclusivity of hiswork. Every Lebanon Circle item resulting in a long work time but ensuring you to receive a great magic item that is unsurpassed in both craftsmanship and quality. We are proud to present some of his strange effects. 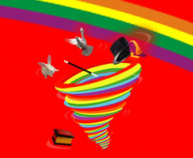 he Magic from Peru ! Twister Magic is a business created by Magician George Iglesias with the objective of bringing in the magicsome of the New, coolest, original and creative magic tricks and gimmicks from South America. They produce some fun tricks in Super Latex and many others in comedy magic. George has been performing magic during the past 15 years with great success in Peru, South America and now in USA and Europe as a professional magician, having appeared on national an international Television Shows more than a 100 times, including presentations for CNN, ANTENA TRES SPAIN, UNIVISION, MEGA TV and TELEMUNDO channel.
Link: products Twister Magic 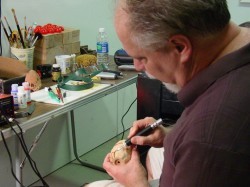 We met the professionnal woodturner Angelo J. Iafrate at FISM 2012 Blackpool (UK). It was absolutely clear for us to work with him so his experience in woodturning and handcraft are exceptionnals. We are sure you will love his art work of wooden chop-cups, wooden egg or ball vases and Morison Pill Boxes of fine and quality magic. He manufactures some great replicas from the past with unique tools, skills and techniques. 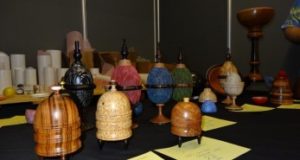 When Angelo J. Iafrate was a younger maker, he did not appreciate the shapes of many of the pieces he was making. They did not fit into any of the preconceived notion of what makes a good woodturning. After having made a good number of vases he have come to understand why the shapes are the way they are. More than that he have come to appreciate the beauty of magic shapes. To that end he have willingly apprenticed himself to the the aesthetic of Floyd Thayer. He produce very small quantities in limited edition for magicians who wants to collection them.
Link: products Majic Brand Woodturning

Don’t worry, you can place your order!
Etudes & Vie (Magicorum) continues to ensure the delivery of all orders by taking all necessary hygiene precautions. The transport and postal services continue their work to the best of their ability and all our parcels are delivered and the value is assured.
We thank you in advance for your patience and loyalty.
We need you more than ever to continue our work and serve you well.